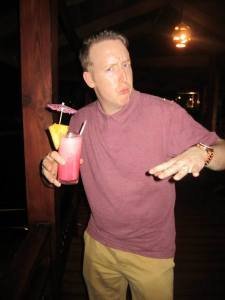 At the beginning of last month at our AGM a new chairman was elected and I’m pleased to announce that long-standing member Haydn ‘Peanut’ Boxall will be taking over the reigns.

As an existing member of the committee Haydn previously ran the social side of EHOS which he has done very well over the past two years.

This is actually his second stint on the committee as he served as Membership Secretary back when Gordon was chairman (so he’s had some good people to learn from).

He has appeared in numerous shows over the years with EHOS and you will have most recently been able to see him playing the lead role of Ren in our very successful production of Footloose.

Amongst this he has choreographed for New Expressions, co produced West End Through the Years and earlier this year made his directing debut with Bugsy Malone.

We recently had the chance to catch up with him and he had this to say on being the new chairman:

‘EHOS is like a family to me. It has given me so much over the years and I want to give back. After all my previous roles with the society I felt it was time to step up and I look forward to continuing the good work which has gone on before me.’

We’d also like to take the opportunity to thank outgoing chair Hailey Budd for all her hard work and dedication during her time with the committee.