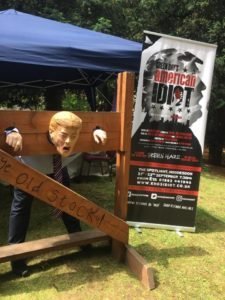 A great day was had on Saturday 1st July at the Broxbourne Council Community Day where the cast of American Idiot had a special guest … Donald Trump!

Locked in the stocks and pelted with wet sponges he took his punishment well as he helped the cast of American Idiot promote the show.

Performances from the cast were well received at this annual event that helps to promotes over 50 community groups from around the Borough to the local public.

While Trump was tending to matters of State a surprise guest, Deputy Mayor Steve Wortley took over in the stocks to keep the  mobs happy!

American Idiot  runs from 21st to 23rd September 2017 at The Spotlight.

To find out more about EHOS latest production or to book tickets click HERE.