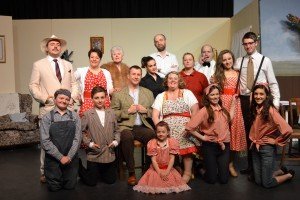 Because the core values of the play lack any real tragic or comic elements as much as other such plays, it was difficult to muster enough interest in order to cast the show.

But perseverance was the key and slowly, but surely, the team began to grow and take shape. As we saw with Calendar Girls, EHOS again produced a balanced mixture of veteran EHOS members along with new faces.

The play also required parts for five children – each having small, but integral roles to the story. It was therefore, a very daunting task to find five young performers to fill the roles! 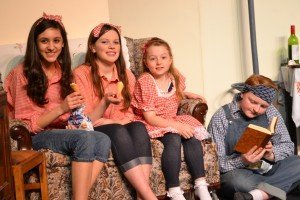 The young performers were absolutely fantastic, striking the need to be confident on stage, whilst not taking the attention away from the exchanges between the adult performers.

Many of the EHOS members first started performing at a young age and can still clearly remember how nervous and daunting it was to act on a small and intimate stage, with the audience right on top of you and no music or dancing to hide behind!!!

EHOS were very lucky to have two very able performers in Alex and Tony as Ma and Pop Larkin which allowed the rest of the cast the confidence to play around with their support characters.

The Show was the closest that EHOS have come to any ‘serious’ acting in many years.

The actors could not rely on slapstick routines or laugh-out-loud comedy situations like they have in previous productions.

There were no big musical numbers which EHOS seem to pull off with such ease to dazzle the audience. The work had to be put into characterisation – To find the balance between doing an ‘impression’ of the well-known TV versions of their characters and adding their own touches to the roles.

The comedy of Darling Buds is in the subtle interactions between the characters, and in order to get away with that – the cast had to make their characters “believable”. A task that every single cast member managed to accomplish on that stage.

A final tip of the hat must go to Alan Shields, who designed and constructed a truly amazing set. Performing around such an authentic looking scenery must have helped the actors create those believable characters and aided to transport the audience into the quaint country farmhouse.

I guess that as well as the great musicals that EHOS pull off so well, we can also do a bit of acting too!

The Darling Buds of May Page >