The story unfolds within a Bethnal Green based hairdressers in the late 1960s. As the blue rinses look on, Carol tells all of her romantic trials tribulations.

She is not alone in her quest for love as various regulars encourage her to take their advice and chase nice guy Johnny.

Meanwhile, Clive who owns the salon tells tales of awards ceremonies. But, like Carol, will he ever find love?

Through numerous well loved 60s hits, we find out! 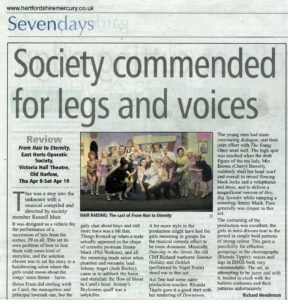 Written and directed by Russell Muir

“Congratulations must go to Russell Muir and his cast. From Hair To Eternity was an absolute triumph both for the company and for the box office. It was great to see so many new members on the stage.

We welcome you all and look forward to seeing you on the stage again sometime soon. The show was received so well that some of the audience returned the following night to see it again. Indeed one lady came to all three performances!

The use of sixties songs is always a bit of a winner, but Russell had managed to blend them in with the story well. This, as well as the fact it was obvious that the whole cast were having a fantastic time and ejoying themselves immensely was the successful recipe. The press reviews were also very complementary about both the ladies legs and soloists!”