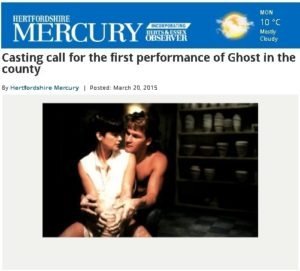 In September 2015 EHOS came back with another first time performance for the Broxbourne Civic Hall.

This time it was the musical Ghost adapted from the well known 90’s film. Based on the hit 1990 romantic drama film of the same name, the musical had its world première at the Manchester Opera House in Manchester in March 2011.

Ghost then began its West End première in summer 2011, opening on 19 July. A Broadway transfer opened in April 2012 and it toured the UK in 2013, after the London production closed in October 2012. Ghost, The Musical  is a timeless fantasy about the power of love.

Walking back to their apartment one night, Sam and Molly are mugged, leaving Sam murdered on a dark street. Sam is trapped as a ghost between this world and the next and unable to leave Molly who he learns is in grave danger.

With the help of a phony storefront psychic, Oda Mae Brown, Sam tries to communicate with Molly in the hope of saving and protecting her.