[foogallery-album id=”4096″]The September 2008 production was ‘Oliver!’, the classic Tony Award winning musical based upon the novel Oliver Twist by Charles Dickens with music and lyrics by Lionel Bart.

This was the second time EHOS produced the show, this time at The Badger Centre, Cheshunt School having previously staged it at the Broxbourne Civic Hall in March 2004.

STORY
Oliver Twist is sold to a Dunstable undertaker after asking for more dinner at the orphanage. Escaping to London he is taken in by Fagin and The Artful Dodger to join their gang of child pickpockets. 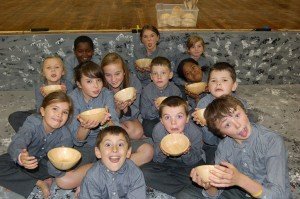 Wrongly accused of a theft, he meets a more kindly gentleman who takes him in, to the concern of one of Fagin’s old pupils, the violent Bill Sykes. In the middle is Nancy, Sykes’ girl whom Oliver has come to trust.