Our Spring show for 2013 was announced as “The Darling Buds of May” based on the novel by H. E. Bates.

The play is adapted for the stage by H. E. Bates himself and is known for the TV series of the 1990’s which kickstarted Catherine Zeta-Jones’ career. 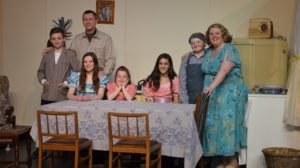 STORY
The key characters in the show, based on the first novel, are Sidney Charles “Pop” Larkin, Florence “Ma” Larkin, who are unmarried, their eldest daughter Mariette, and tax collector Cedric Charlton, who is renamed Charley by the Larkins.

Charley arrives at the beginning of the first episode to get Pop Larkin to fill in his tax forms. He is distracted when he falls in love with Mariette Larkin at first sight, and the Larkins distract him further by attempting to teach him to play crib and getting him drunk.

In spite of a hangover the next day, he becomes captivated by the idyllic country life led by the Larkins, and ends up a member of the family.